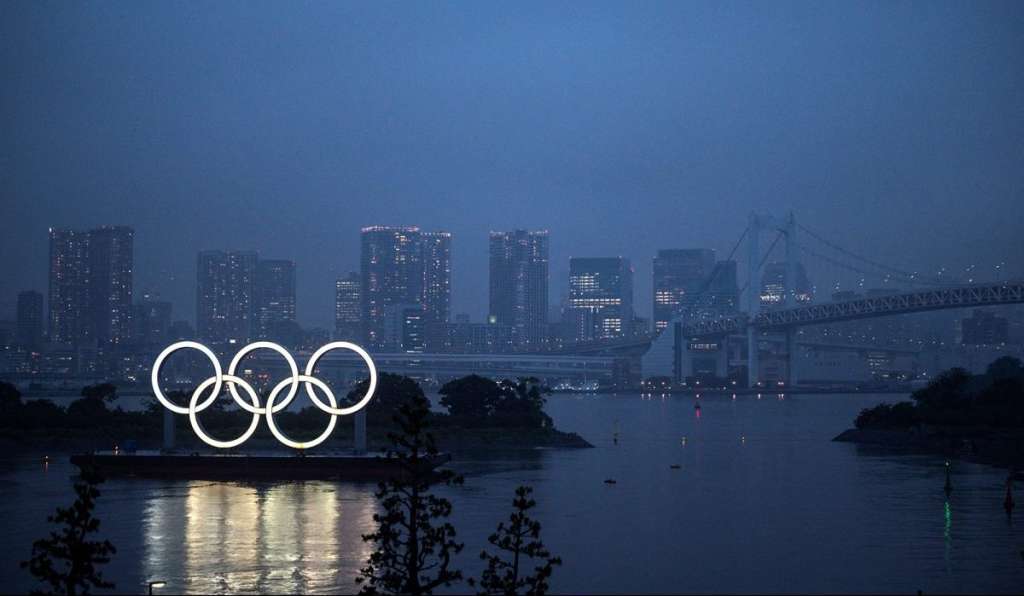 This general view shows the Olympic Rings lit up at dusk on the Odaiba waterfront in Tokyo on July 9, Credit: Charly Triballeau/AFP/Getty Images

TOKYO (AP) — Kara Eaker, an alternate on the United States women’s gymnastics team, has tested positive for COVID-19 in an Olympic training camp in Japan.

Al Fong, the personal coach for both Eaker and fellow Olympic alternate Leanne Wong, confirmed the positive test in an email to The Associated Press on Monday. The coach said Eaker, 18, was vaccinated against the novel coronavirus two months ago.

Eaker and Wong have been placed in isolation.

USA Gymnastics did not identify Eaker or Wong but said in a statement the athlete who tested positive and another alternate would be subject to additional quarantine restrictions.

“The Olympic athletes moved to separate lodging accommodations and a separate training facility, as originally planned, and will continue their preparation for the Games,” the organization said in a statement. “The entire delegation continues to be vigilant and will maintain strict protocols while they are in Tokyo.”

The positive test was the latest in a growing line of daily reports of athletes and others testing positive at the pandemic-delayed Olympics. Eaker is the first American to test positive.

“In alignment with local rules and protocols, the athlete has been transferred to a hotel to quarantine,” the U.S. Olympic and Paralympic Committee said in a statement, citing privacy in not identifying the individual.

The positive test came after Eaker received what was described as a “false positive” over the weekend. Eaker took a subsequent test that was negative before testing positive again multiple times.

“Kara is s doing very well with no symptoms,” Karla Grimes, who works at GAGE Center, the gym in the Kansas City, Missouri, suburbs where Eaker trains, said in an email to the AP. “She is incredibly strong and very brave. Although this is a very disappointing outcome for her, she wants everyone to know she is OK.”

Biles, who is also the world champion, and the rest of the regular team have been vaccinated. Skinner, who made the team in the “plus-one spot” — meaning she can compete as an individual in Tokyo — following Olympic Trials did battle both COVID-19 and pneumonia last winter.

The Games open Friday with a state of emergency in force in Tokyo, which means almost all venues will be without any fans as new cases rise in the capital. The women’s gymnastic team begins competing Sunday.

The U.S. officials said the test took place when the team was training just outside Tokyo in Inzai City. Team members arrived last week for the camp to great fanfare at Narita airport.

The Tokyo Metropolitan Government on Monday reported 727 new cases in the capital. It is the 30th straight day that cases were higher than the previous week. The cases last Monday were 502.