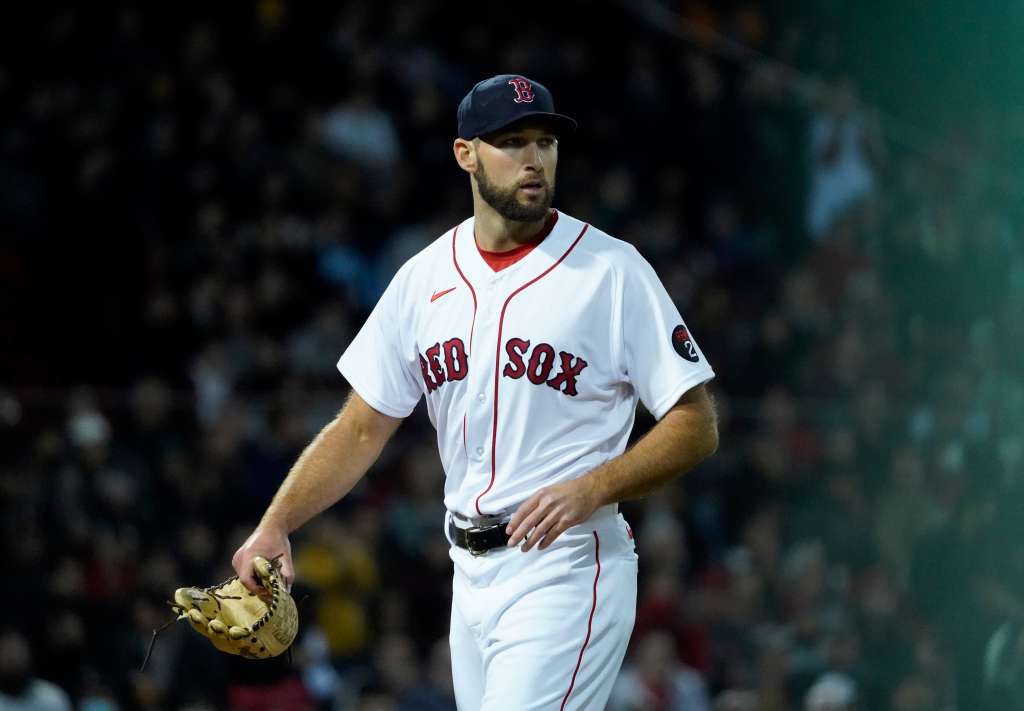 Boston Red Sox starting pitcher Michael Wacha (52) leaves the game during the sixth inning of a baseball game against the Los Angeles Angels at Fenway Park, Tuesday, May 3, 2022, in Boston. (AP Photo/Mary Schwalm)

BOSTON (AP) — Michael Wacha pitched neatly into the sixth inning against his former team and the Boston Red Sox shut down St. Louis’ rally in the ninth, holding off the Cardinals 6-5 Friday night.

But Dylan Carlson doubled, Harrison Bader tripled and Andrew Knizner was hit with a pitch, ending Davis’ outing. Reliever Tanner Houck gave up an RBI double to Tommy Edman that made it 6-3 and a two-run double to Brendan Donovan.

Paul Goldschmidt then was called out on strikes, giving Houck his third save.

Trevor Story and Rafael Devers each drove in two runs for Boston. Nolan Arenado hit his 12th homer for the Cardinals.

Wacha made his major league debut with the Cardinals in 2013 and helped them reach the World Series against Boston. He beat the Red Sox in Game 2, but was the starter and losing pitcher in Game 6 at Fenway Park as Boston won the championship.

Adam Wainwright (5-5) went 6 1/3 innings, giving up four runs on seven hits and a walk. A former teammate with Wacha on the Cardinals, Wainwright struck out five and a hit batter.

Jarren Duran led off the Boston first with a triple and later scored when J.D. Martinez grounded into a double play.

Story’s one-out single in the fourth drove in Martinez, who opened the inning with a single, and Xander Bogaerts, who doubled. It was the first time Story had multiple RBIs in a game since June 3.

Devers hit a two-run single during a three-run seventh that made it 6-1.

Cardinals: Before the game, C Yadier Molina was placed on the 10-day injured list, retroactive to Thursday, with right knee inflammation. He is expected to be shut down for at least a week. C Iván Herrera was called up from Triple-A Memphis to take his place on the roster.

Red Sox: LHP Chris Sale, out all season with a right rib fracture, is scheduled to begin a rehab assignment on Monday in the Florida Complex League. He is expected to pitch two innings. Manager Alex Cora said the goal is for Sale to throw five innings in a rehab game before he returns to the major leagues. … Cora said RHP Nate Eovaldi is progressing from low back inflammation more slowly than the club expected. Eovaldi has been on the IL since June 9. … RHP Garrett Whitlock, who has been on the IL since June 9 with right hip inflammation, has started playing catch. … OF Kiké Hernández, on the IL since June 8 with a right hip flexor strain, took batting practice on the field before the game and is scheduled to take live batting practice on Saturday against LHP Josh Taylor, who has been out all season with a low back strain. If Taylor comes through that session with no problems, he could begin a rehab assignment next week.

Red Sox RHP Kutter Crawford (1-1, 5.74 ERA) is scheduled to face Cardinals RHP Dakota Hudson (4-3, 3.29). This will be Crawford’s second start of the season — in his last start, June 12 at Seattle, he took a no-decision, going five scoreless innings and allowing one hit with seven strikeouts. Hudson took the loss in his last outing, June 12 against Cincinnati, giving up season highs of six runs and nine hits over seven innings.