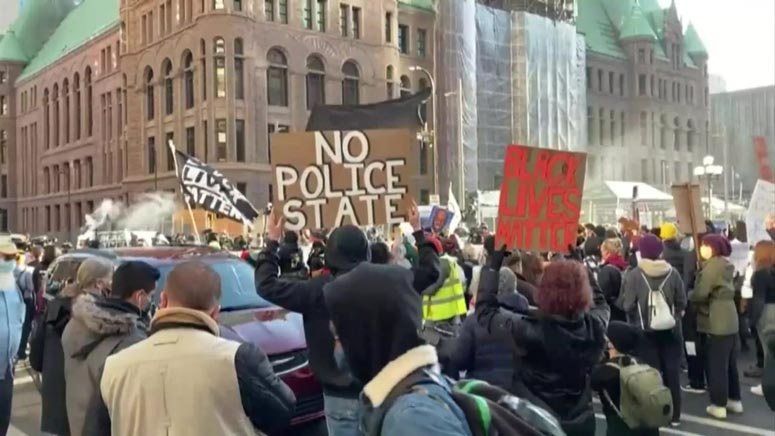 (CNN) — Rep. Maxine Waters on Saturday night called for protesters to “stay on the street” and “get more confrontational” if former Minneapolis police officer Derek Chauvin is acquitted in the killing of George Floyd.

The comments by Waters, a California Democrat and icon among progressives, were immediately seized on by Republicans who claimed that Waters was inciting violence. The congresswoman denied in a subsequent interview that she was encouraging violence, but the remarks come at a time of immense national tension amid several high-profile killings of Black people at the hands of police officers and as American cities brace for a fresh wave of protests as the Chauvin trial nears a close.

Waters said she was in Brooklyn Center, Minnesota, on Saturday night to show her support for protesters amid ongoing protests over the police killing of Daunte Wright and to also support his family.

“We’ve got to stay in the street and demand justice,” Waters said to reporters, according to video posted on social media.

“We’re looking for a guilty verdict and we’re looking to see if all of the talk that took place and has been taking place after they saw what happened to George Floyd. If nothing does not happen, then we know that we got to not only stay in the street, but we have got to fight for justice,” she added.

Asked what protesters should do if there is no guilty verdict, Waters said protests should continue.

The congresswoman’s comments come at a particularly fraught time in the nation’s history. Closing arguments are underway in Chauvin’s trial, and protests continue over the killing of Wright. Authorities have ramped up security around Minneapolis, with crews installing razor wire around some police buildings and National Guard troops have been deployed in parts of the city’s downtown.

Waters’ office did not respond to a CNN request for comment. In an interview with theGrio that was published on Monday morning, Waters said she was “nonviolent” and said her remark about being “confrontational” was in regard to changing the justice system in the US.

The words “more confrontational,” McCarthy tweeted Sunday night, means she is “inciting violence.” McCarthy also says if House Speaker Nancy Pelosi doesn’t take action against Waters, he will. McCarthy’s options are limited as Republicans are in the minority, but he could take several symbolic steps, including calling for a censure of Waters, even if Democrats would block such an action.

Asked if Waters needs to apologize, Pelosi told CNN, “no, she doesn’t.”

“Maxine talked about confrontation in the manner of the Civil Rights Movement. I myself think we should take our lead from the George Floyd family,” she said Monday. “They’ve handled this with great dignity and no ambiguity or lack of misinterpretation by the other side. No, no, I don’t think she should apologize.”

Asked if she believed Waters’ comments incited violence, Pelosi said, “no, absolutely not.”

Greene, meanwhile, called on Twitter for Waters to be expelled from Congress.

The criticism from Republicans is striking, however, following the deadly insurrection at the US Capitol in January after many Republicans perpetrated the falsehood that former President Donald Trump was reelected. Greene was removed from her committee assignments in February after she indicated support for executing prominent Democratic politicians several years ago.

Waters has come under sharp criticism in the past, including from fellow Democrats, for comments she has made about Republicans. She made headlines in 2018 when she encouraged supporters to harass Trump administration officials in public over its family separation policy at the border.

This story has been updated with additional reaction.