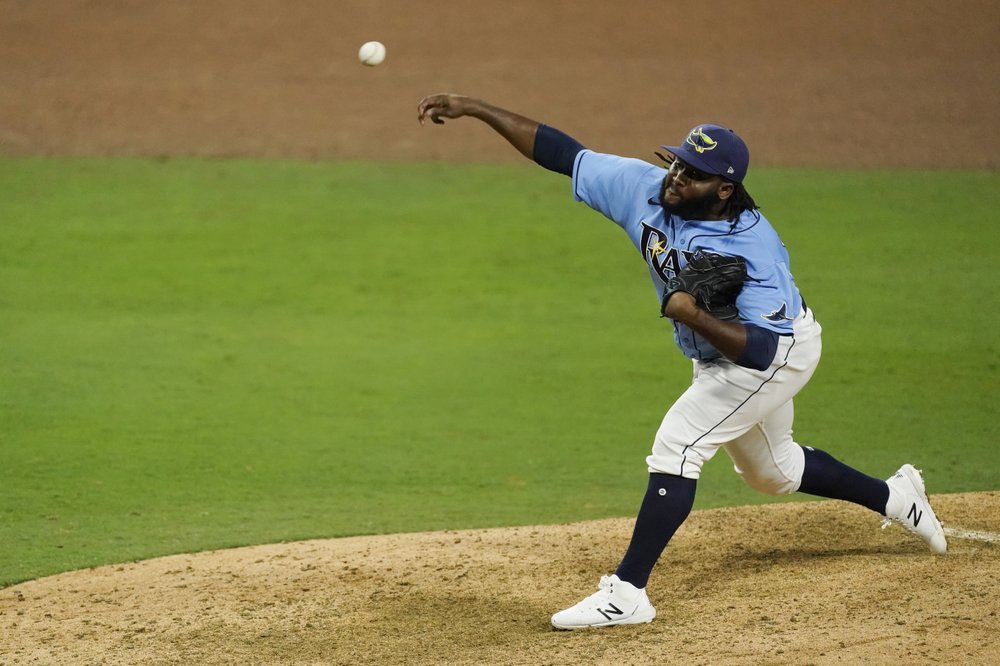 The top of the eighth inning Sunday night was gut check time for the mini payroll/mighty heart Tampa Bay Rays. With Tampa leading 2-1 in Game 1 of the American League Championship Series, the Astros had loaded the bases with two outs. Manager Kevin Cash called for the man who is quickly becoming a postseason hero in Tampa Bay: reliever Diego Castillo.

It took only one pitch for Castillo to end the threat. Castillo gave Yuli Gurriel (21-for-42 lifetime with the bases loaded) a 97 mile-per-hour heater high and tight. The Houston first baseman hit a weak bouncer just to the right of second base. Tampa second baseman Brandon Lowe ranged to his right to snare the ball and made a deft shuffle step to tag the bag, then threw to first for an inning-ending double play. With that one pitch, Tampa’s win probability rose by 35%, from 52 to 87 percent. Castillo remained on the mound in the ninth to finish off the Astros, striking out Jose Altuve with the tying run on second base.

That high-intensity outing was just another day at the office for Castillo, who only two days earlier put an end to the New York Yankees postseason hopes. In Game 5 of the ALDS, Castillo pitched the final two innings to pick up the win, retiring six of the seven batters he faced, including strike outs of league batting champion DJ LeMahieu in the eighth and Giancarlo Stanton and home run champ Luke Voit in the ninth.

Castillo is quietly putting together one of the best postseason resumés to start a career in recent memory. In nine career playoff appearances he has not surrendered a single run, going 12 innings and allowing just eight hits and four walks to go with 16 strikeouts. He’s recorded at least five outs in more than half of his appearances.

The Rays signed Castillo as an international free agent in early 2014 and developed him over four full seasons in the minor leagues. He improved at every level of their system, compiling a 2.48 ERA. He started just one game in the minors. Tampa had him pegged as an impact reliever and groomed him with that in mind.

The biggest change to Castillo’s game this season has been his increased reliance on a nasty slider, which he threw nearly two-thirds of the time this season (most among relievers). Castillo threw his slider less than half the time his rookie season and just over half in 2019. This year it jumped to a whopping 65%. The results have been telling: a career-high swing-and-miss and strikeout percentage.

Just as important as his play-to-your-strengths pitch selection is the flexibility Castillo brings to the Tampa bullpen. The man can pitch in any inning he is needed and seems invigorated by working on short rest when he’s called upon in tight situations. This year, Castillo has pitched in the sixth, seventh, eighth, and ninth innings of playoff games. His last three appearances have come on zero or one days rest. In them he’s allowed one hit (and no runs of course) in 4.2 innings. He’s currently the postseason leader in innings pitched in close and late game situations.

It must have been sweet, satisfying irony for Rays fans to watch Castillo get the last out of the ALDS just minutes after Yankee closer Aroldis Chapman allowed the eventual game-winning homer to Tampa’s Mike Brosseau in the bottom of the eighth.

Chapman restructured his contract last fall, signing a three-year $48 million deal to stay in pinstripes. Brosseau is a former undrafted free agent making the league minimum. Castillo started off the ninth by striking out $325 million man Giancarlo Stanton. Stanton and Chapman are now both watching from home while Brosseau and Castillo play on. What’s Castillo making? Do you really have to ask? The MLB minimum. In Tampa it’s mind over money.