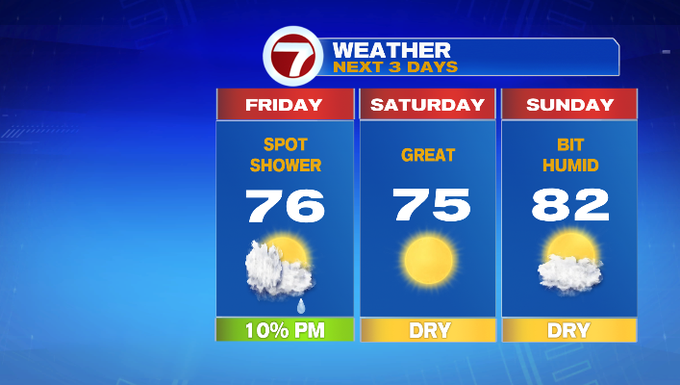 We had on and off showers for much of the day today while the South Coast and the Cape and the Islands dealt with pockets of downpours that continued to pour in through the afternoon. Pockets of minor flooding are possible along some of the roadways there as more rain is expected through the evening hours.

Tonight, the rain starts to taper as early as 11PM, with the bulk of the rain shifting off the coast.

We’ll see some clouds early tomorrow morning, while will quickly break apart to reveal some partial sunshine for your Friday afternoon. A spot shower cannot be ruled out tomorrow afternoon, but these will be brief and not everyone will be seeing those. Highs on Friday will reach into the mid 70s. It will be noticeably less humid, too.

The 70s stick around for Saturday coupled up with clear, sun-filled skies.

Sunday is slightly warmer with highs in the low 80s under partly cloudy skies — it will feel a bit humid if you’re heading to Gillette for the Patriots season opener.

Speaking of summer, if you’re trying to hold on to some of those weekend beach days into September, just be cautious of the water. A High Surf Advisory has been issued for our coastal areas due to large breaking waves and dangerous rip currents from the swells associated with Hurricane Larry, which will remain 100s of miles away from the coast of southern New England through the weekend.

Looking ahead to the following work week, Monday and Wednesday bring rain chances. Tuesday looks like the pick of the week although it will be slightly cooler at the coast due to onshore winds out of the east-northeast.