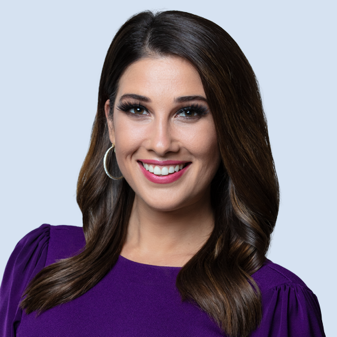 Returning to her New England roots, Juliana Mazza is thrilled to join the 7News team as a weekend morning anchor!

Juliana comes to Boston from WDSU in New Orleans where the Louisiana Associated Press named her Newsperson of the Year and Best News Anchor. She reported on several major stories in New Orleans including two mass shootings, the Church sex-abuse scandal and severe flooding. Juliana also followed the city’s first female mayor on the campaign trail.

Juliana grew up in Connecticut and graduated from UCONN with a degree in journalism. She landed her first on-air job as an anchor/reporter for WWLP in Springfield, Massachusetts.

Juliana spends her free time playing with her pup Elle and exploring all the best foods in Boston. Do you have a news tips or a must-try recommendation? Reach out at jmazza@whdh.com, @JulianaMazzaTV (Facebook) or @JulianaTVNews (Twitter).