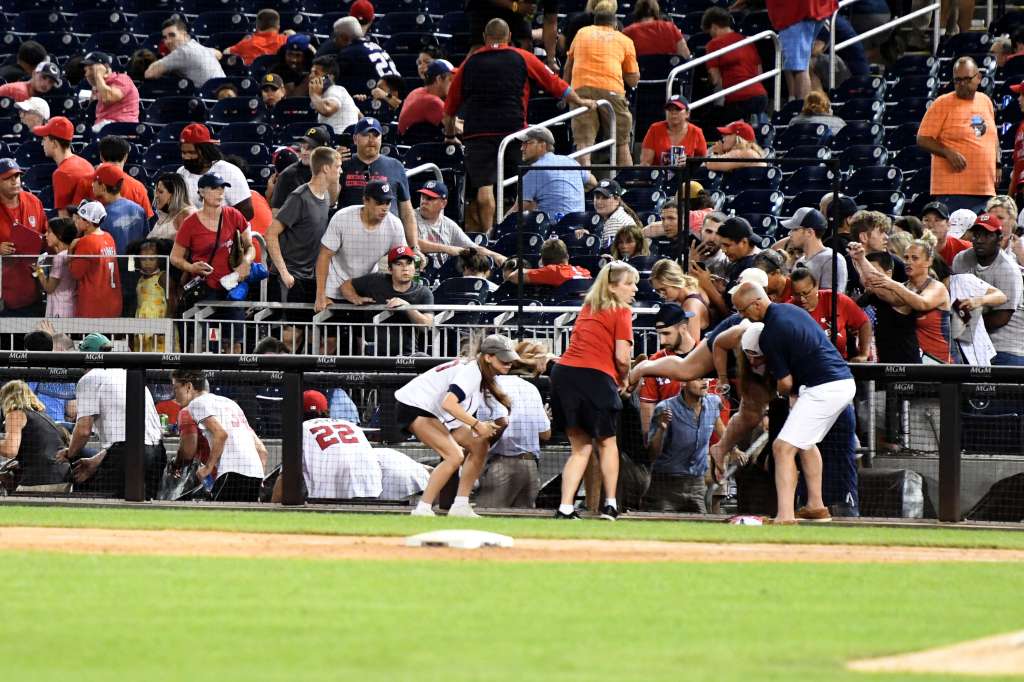 WASHINGTON, DC - JULY 17: Fans run for cover after what was believed to be shots were heard during a baseball game between the San Diego Padres the Washington Nationals at Nationals Park on July 17, 2021 in Washington, DC. (Photo by Mitchell Layton/Getty Images)

(CNN) — A series of shootings over the weekend in Chicago, Philadelphia, Washington, DC, and other American cities underscored the ongoing rise in shootings and gun violence in the US this year.

The shooting near Nationals Park in DC was the most prominent of the incidents, as the audible gunshots sent fans and players scrambling for safety in the middle of a Washington Nationals baseball game.

Other shootings injured children, including a 1-year-old wounded on Saturday night in Philadelphia. They further a trend of heightened gun violence that emerged after Covid-19 lockdowns were lifted.

According to the FBI’s preliminary 2020 findings, the number of murders rose by 25% between 2019 and 2020 — the largest jump recorded in the US in a one-year period since the FBI began releasing annual figures in the 1960s. Findings from the National Commission on Covid-19 and Criminal Justice were similar, citing a 30% increase in the homicide rate between 2019 and 2020 in the 34 major cities it surveyed.

Here’s a look at some of the weekend’s shooting incidents spread across the US.

At least 53 people were shot in 41 separate shootings in Chicago from Friday evening to Sunday evening, the police department’s incident reports show. Of the 53, six have died, the reports show.

An 8-year-old is among the injured after being shot early Sunday morning while riding in a car. The police report says that around 1 a.m. local time, an SUV drove by and shot at the car in which the child was riding.

The victim has a gunshot wound to the leg and is in good condition, the report states. A man in the vehicle was also shot and has been released from the hospital.

On Saturday night, five female victims ranging in age from 12 to 19 were injured in a shooting outside a party, Chicago police said.

“The victims were standing with a group on the sidewalk and were attending a party when occupants in a dark-colored SUV fired shots,” said the police department. All of the victims are in fair condition.

A 25-year-old male was also shot in the incident, Chicago police said. He was treated and released from the hospital.

There have been no arrests made in those two shootings, according to the incident reports.

Two people were injured, including a 1-year-old boy, in a shooting in West Philadelphia on Saturday night around 8 p.m., according to Philadelphia Police Department spokesperson Officer Miguel Torres.

The 1-year-old was shot in his left leg and transported to the Children’s Hospital of Philadelphia, where police said he was listed in stable condition. The second individual, a 26-year-old male, was shot in his left forearm in the incident and transported to Pennsylvania Presbyterian Medical Center, where he is also listed in stable condition, according to police.

There have been no arrests made so far, and no weapons were recovered by police at the scene.

So far this year, homicides in Philadelphia are outpacing last year’s numbers, according to police records. Philadelphia reached its 300th homicide of the year in July for the first time in over three decades, according to available online records dating back to 1989.

Additionally, the city has seen nearly 1,200 shootings this year, compared to 938 during the same time period last year, according to data through July 12.

Three people were injured in a shooting Saturday night outside Nationals Park in Washington, DC, sending baseball fans and players scrambling during a game, police said.

A fan outside of the stadium was one of three people wounded, according to Ashan Benedict, executive assistant chief of police for DC’s Metropolitan Police Department.

CNN journalists inside the stadium reported hearing multiple loud bangs during the bottom of the 6th inning in a game between the Washington Nationals and San Diego Padres. Fans fled their seats and sought shelter after hearing the gunfire. Benedict said there ultimately was no threat to people inside the stadium.

“I just want to assure the public that at no time during this incident were individuals inside the stadium attending the game in any kind of danger. This was not an active shooter incident and it’s not being investigated as such. Everything took place outside the stadium,” he said.

Benedict told reporters that two vehicles were involved in a “shootout” on a street outside of the stadium during the game. Police recovered one of the vehicles but the other remains at-large.

Separately, on Friday night, a 6-year-old girl was killed and five adults were injured in a drive-by shooting in Washington, officials said. The incident happened shortly after 11 p.m. in the southeast part of the district.

In a video released by DC police, a silver or gray vehicle can be seen driving through the intersection of Martin Luther King Jr. Avenue SE and Malcom X Avenue SE, and several gunshots are fired from the car.

The child was identified as Nyiah Courtney, according to Metropolitan Police Department Chief Robert Contee. In addition, three men and two women were shot and sustained non-life-threatening injuries, police said.

One woman has died and six other people were wounded in a shooting in downtown Portland, Oregon, early Saturday, according to the Portland Police Bureau.

The victims were taken by ambulance to a hospital where the woman died, police said in a statement Saturday.

The other six victims sustained wounds of varying degrees of severity, though the injuries are not believed to be life-threatening, police said. Officers did not locate a suspect or suspects and no arrests had been made, police said.

Two people were killed and four others injured in a shooting in Sacramento on Friday night, according to a news release from the Sacramento Police Department.

The two victims who died were both believed to be adult males, police said, but the Sacramento County Coroner’s Office has not released their identities.

Officers who were patrolling the area heard gunshots in Old Sacramento just before 11:45 p.m. on Friday, police said. Officers from neighboring agencies and across the city responded to assist, according to police. Police said that the other four victims received treatment for their “non-life threatening injuries” at nearby hospitals.

Although the investigation is still in its early stages and a motive is unclear, the police department said that “it is believed that there was some type of altercation between two groups prior to the shooting,” and that “multiple firearms” have been found at the scene.

The SPD has not released any suspect information, but what happened “is believed to be an isolated incident,” according to police.

Correction: An earlier version misstated which night five women were injured in a Chicago shooting. It was Saturday.