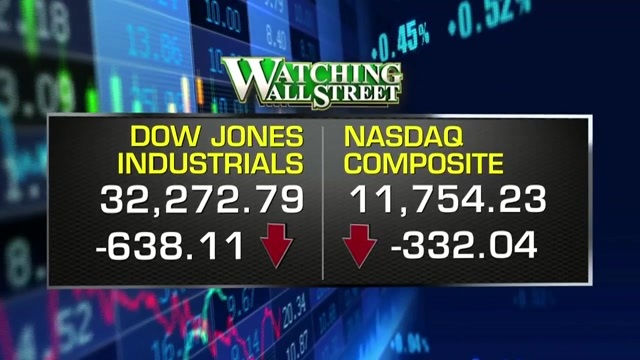 Wall Street’s losses accelerated as the closing bell for trading approached, with traders scrambling to get in last moves ahead of a highly anticipated report on U.S. inflation due Friday morning. The S&P 500’s drop more than doubled in the final hour of trading.

The weakness for markets started on the other side of the Atlantic after the European Central Bank said it would raise interest rates next month for the first time in more than a decade. Another hike is set for September, possibly by double July’s increase, and the central bank will also halt its bond-buying program next month.

It all marks a “sea change” in policy for the European Central Bank, according to Marilyn Watson, head of global fundamental fixed income strategy at BlackRock.

And it’s part of a growing global tide where central banks are removing the ultra-low interest rates that were meant to goose borrowing, economic growth and stock prices through the pandemic. Instead, they’ve swung their focus toward raising interest rates and making other moves to slow growth in order to knock down high inflation.

The risk is that such moves could cause a recession if they’re too aggressive. Even if central banks can pull off the delicate balancing act and avoid a recession, higher interest rates put downward pressure on stocks and all kinds of investments regardless.

The wide expectation is that the Fed will raise its key interest rate next week by half of a percentage point, the second straight increase of double the usual amount. Investors expect a third to hit in July.

Where the Fed goes from there depends on inflation’s path, which is why Wall Street is so keyed in on the latest reading for the U.S. consumer price index, which is due Friday morning. Economists expect it to show inflation slowed a touch to 8.2% in May from 8.3% a month earlier.

Investors have been searching for signs that inflation may have already passed its peak, which would be good for markets because it could mean a less aggressive Fed. Speculation has been rising and falling that the Fed could take a pause on rate hikes at its September meeting, swaying with every data point on the economy. That in turn has made stocks particularly prone to big swings.

European stocks sank immediately following the European Central Bank’s announcement on rates, which came before U.S. markets opened. French stocks were down only slightly before the announcement, but the CAC 40 index fell to a 1.4% loss afterward. Germany’s DAX lost 1.7%.

In the U.S., Treasury yields rose following the move from Amsterdam, though they wobbled a bit after that. The 10-year Treasury yield got as high as 3.09% before paring back to 3.04%, up from 3.02% late Wednesday.

A report showed that slightly more U.S. workers filed for unemployment last week than economists expected. That’s a potentially negative signal, but the overall number still remains low compared with history. Economists also said seasonal factors may have affected the most recent numbers, overstating some things due to the Memorial Day holiday.

Higher gasoline prices have been putting a tighter squeeze on both consumers and households, upping the pressure on budgets. Crude oil prices were down modestly on Thursday, but they remain up by roughly 60% for the year. Much of the jump is due to Russia’s invasion of Ukraine.

Lockdowns in major Chinese cities because of COVID-19 have added more pressure to global supply chains, which in turn worsens inflation. But some of the impact could be easing. China reported its exports surged 17% over a year earlier in May, up from April’s 3.7% growth, as coronavirus precautions were eased in Shanghai and other cities.

Many investors are bracing for big swings in financial markets to continue given the deep uncertainties about where inflation and the Fed’s policies are heading. Stocks have been clawing back since hitting a bottom in the middle of last month, but the S&P 500 remains down 15.7% for the year so far.

“Even if the market bottomed in May, we will see another sell-off at some point,” Nancy Tengler, CEO of Laffer Tengler Investments, wrote in a research note, “and some of us will feel worse than we thought we could because we thought it was over.”