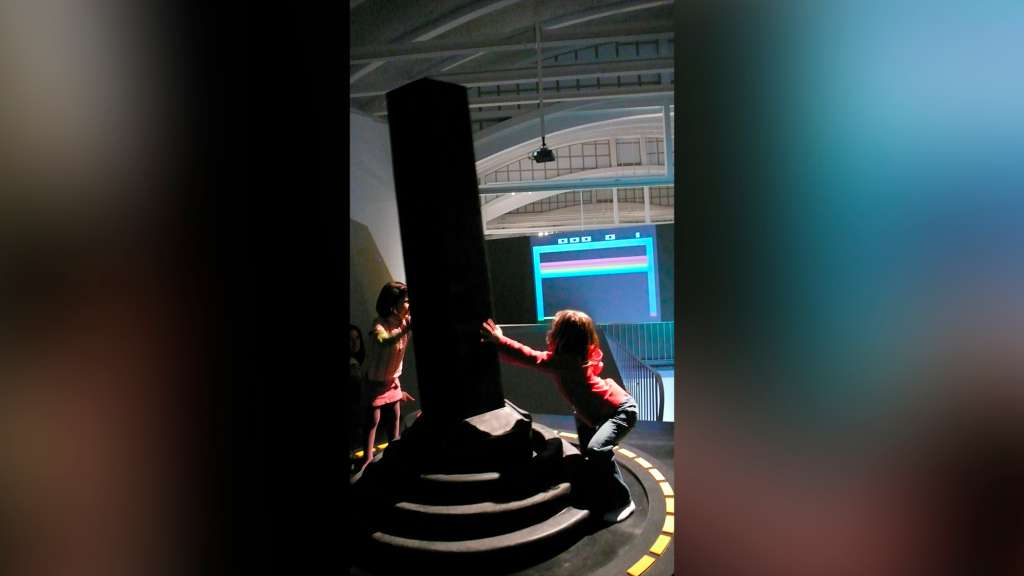 Two girls operate the Giant Joystick at LABoral Art and Industrial Creation Centre, March 31, 2007 in Asturias, Spain. The giant video game controller made of wood, rubber and steel by a Dartmouth College professor Mary Flanagan has made it into the Guinness World Records 2022 as the largest joystick. Flanagan created the controller in 2006 to celebrate her childhood experience of playing Atari 2600 video games. (Mary Flanagan via AP)

(CNN) — In 2006, before the advent of augmented reality games like Pokémon GO, artist Mary Flanagan wanted to find a way to get random people to play a game together. Her solution? Create a 9-foot-tall video game joystick — which made it into the Guinness World Records 2022 as the largest of its kind.

The giant controller is nearly 14 times the original size of a classical Atari CX40 controller, according to Flanagan. Commissioned for London’s House of Technologically Termed Praxis, the joystick was crafted from wood, steel and rubber. It’s currently held at the ZKM Center for Art and Media in Karlsruhe, Germany, and it has toured Spain, the United Kingdom and the US.

“The idea was to really take something that’s for solitary play and make it so big that it demands collaboration and brings people together,” said Flanagan, chair of Dartmouth College’s Film and Media Studies department and the Sherman Fairchild Distinguished Professor in Digital Humanities.

She worked with a team of expert fabricators at New York’s Brooklyn Navy Yard to create her “engineering marvel,” which comes apart in two giant crates.

“It’s kind of complicated to even move around,” she told CNN. “In between shows was always awkward because sometimes I’d have to store it in a storage unit, sometimes it was being stored in another country in between two shows. At one point it was in my friend’s barn in upstate New York.”

At least two people must operate the joystick, which can play classic Atari games including “Breakout” and “Centipede.” Although as a unit the joystick has a little Atari inside, Flanagan said the joystick could technically be hooked up to anything.

“When you climb on it, a very high score in something like ‘Breakout’ or ‘Pong’ is like 11 because people don’t move that fast when they have to move their whole bodies,” she said.

“Then trying to coordinate with different people… that slows everybody down and kind of just changes our relationship to this familiar game practice and gives us a little bit of critical distance.”

Flanagan entered the video games space as a game designer for CD-ROM games in the 1990s. She also created what some consider the first autobiographical video game called “[domestic].” As an author of several books about video games, Flanagan has pursued more creative interpretations of digital culture, such as creating games for social change or that address social issues — which she believes is just what the joystick does.

Being featured as a Guinness World Record was quite the shock for Flanagan, who hoped to “produce a childlike scale” and “generate discussion and group play,” according to Guinness. Her goal, she said, beyond bringing people together was to get people to defamiliarize parts of their daily lives and make them “a little strange.”

“There’s just something that we can all benefit from artists’ takes on pop culture, fun things around us, and kind of open our eyes to new ways of looking at something that’s really familiar,” she said.

Flanagan noted that the joystick is not tied to a particular generation, especially when considering how niche and hip some old video games have become recently. She related this phenomenon to classic cars, which have entered the mainstream although few people drive them anymore.

Everyone though, she admitted, has nostalgia for when they played their first video game.

“It doesn’t matter if it’s ‘World of Warcraft‘ or ‘Fortnite‘ or ‘Candy Crush’ or whatever their relationship with their game is. It opens them up to a new way of being in the world, and people remember those moments where they bond with their game, and that’s kind of romantic,” Flanagan said.

Flanagan is currently working on a “feminist artificial intelligence” project that is trained only on the work of women artists to explore biases in algorithms. She hopes that through her joystick and current projects, video games and their modifications can be crucial tools for encouraging meaningful interaction.

“Games themselves are almost like little universes, and we can invent possible futures in them,” she said. “It’s my hope that maybe we could feel optimism because of play and maybe break down some barriers and be together.”