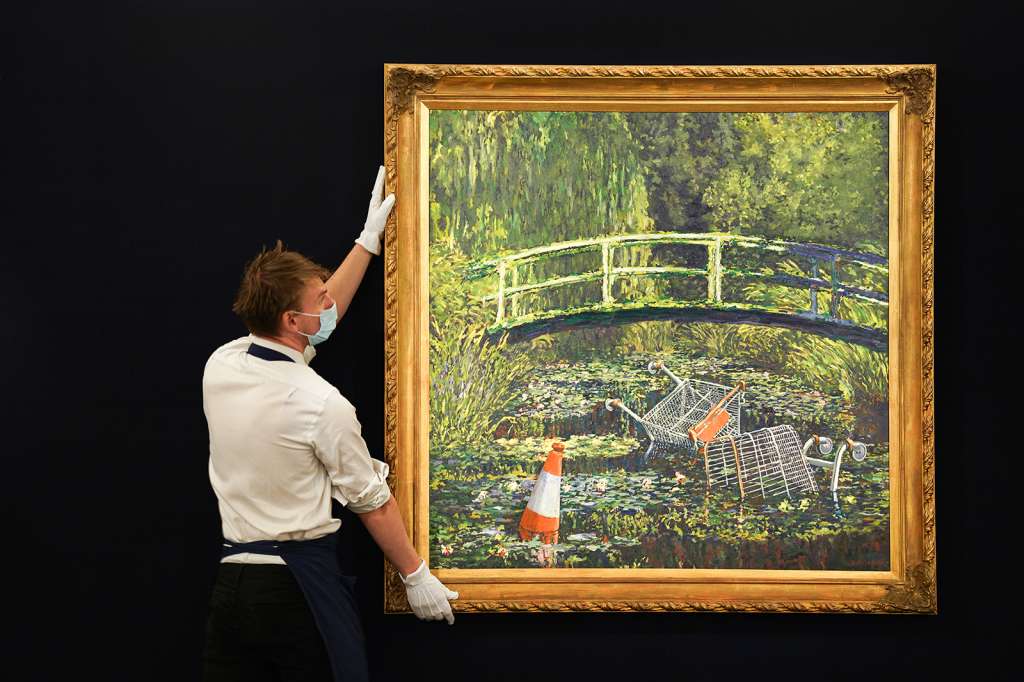 LONDON, ENGLAND - SEPTEMBER 18: Banksy's 'Show Me The Monet' (2005) to star in Sotheby's 'Modernites/Contemporary' evening auction on the 21st October at Sotheby's on September 18, 2020 in London, England. (Photo by Michael Bowles/Getty Images for Sotheby's)
CNN

(CNN) — Banksy’s take on a Claude Monet masterpiece has sold for £7.6 million ($9.8 million) following a nine-minute bidding battle, auctioneers at Sotheby’s have said.

In “Show me the Monet,” famed street artist Banksy reimagines Monet’s “Bridge over a Pond of Water Lilies” as a modern-day scene.

The picture is complete with environmental pollution: A traffic cone and two shopping carts submerged in the otherwise idyllic scene.

Monet’s original painting was one of 12 Impressionist works featuring views of the artist’s Japanese bridge over his water garden, near Giverny, Northern France.

Executed between 1897 and 1899, Monet painted the variations depicting the same idyllic view at different times of the day, during varying weather conditions and seasons.

Banksy’s painting, an oil on canvas created in 2005, was showcased as part of the “Crude Oils: A Gallery of Re-mixed Masterpieces, Vandalism and Vermin” exhibition, where the artist re-imagined famous works by artists including Edward Hopper, Jack Vettriano and Vincent van Gogh.

At Wednesday’s auction, which was live streamed and attended by some select clients, the tongue-in-cheek artwork was sold to an Asian private collector for £7.6 million — above the estimate of £3-5 million, Sotheby’s said.

The painting is the second most expensive one from the elusive British artist.

Last year, Banksy’s “Devolved Parliament,” a satirical oil painting depicting the House of Commons filled with chimpanzees, sold at auction in London for a record-breaking £9,879,500 ($12,200,000).

The artist’s identity remains a secret, but in October last year the artist’s former agent and photographer, Steve Lazarides, published images alleged to show him at work — without revealing his face.