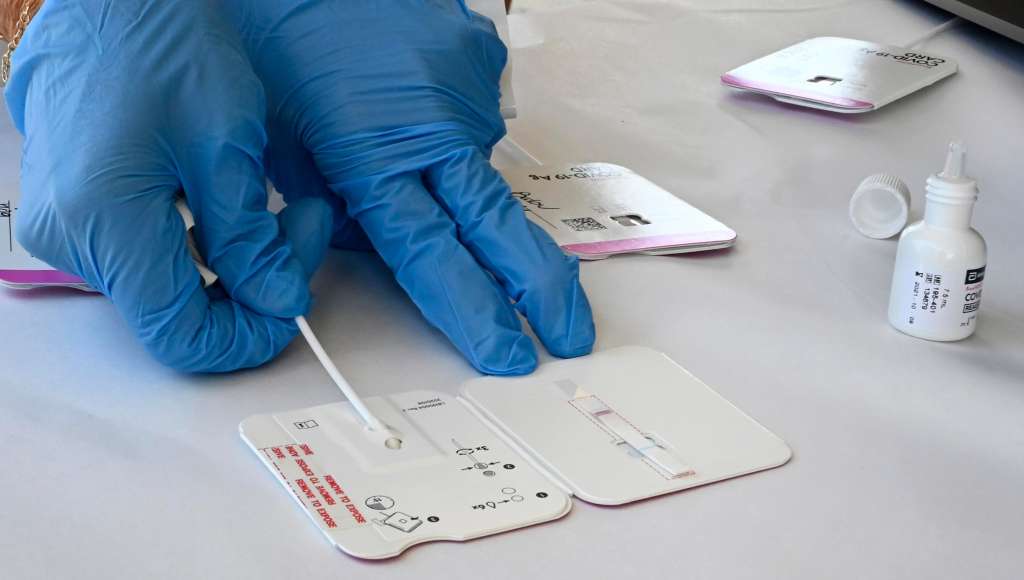 PALOS VERDES ESTATES, CA - AUGUST 24: A rapid COVID-19 test swab is processed at Palos Verdes High School in Palos Verdes Estates on Tuesday, August 24, 2021. The district is encouraging all students and staff to test before the first day of school, August 25, and there are three sites for the drive-up testing. (Photo by Brittany Murray/MediaNews Group/Long Beach Press-Telegram via Getty Images)

(CNN) — The Biden administration has signed its first contracts with a Covid-19 test manufacturer as part of President Joe Biden’s efforts to distribute half a billion free rapid tests throughout the country, a White House official confirms to CNN.

The Department of Defense awarded a $51 million contract to Goldbelt Security, LLC, “for delivery of over-the-counter COVID-19 test kits.” With this contract, the administration is purchasing existing tests that the company has, according to a White House official. The administration plans to sign other contracts for manufacturing.

In a news release, the agencies said, “The DoD’s Joint Program Executive Office for Chemical, Biological, Radiological and Nuclear Defense (JPEO-CBRND) led this effort in partnership with DoD’s Defense Assisted Acquisition Cell (DA2), Army Contracting Command, and the HHS Office of the Assistant Secretary for Preparedness and Response (ASPR). The procurement was funded through the American Rescue Plan Act to supply critical medical resources to the nation.”

Officials have offered few details since Biden announced the endeavor to send free test kits amid a nationwide shortage and surge in new cases. But they expect to launch a website this month where people can sign up for the tests online and then ship them out.

The first contract has been signed and more are expected in the coming weeks, officials said.

Biden last month announced the purchase of a half-billion at-home rapid Covid-19 tests, one of a series of new steps he unveiled as the country faces a potentially crippling wintertime surge of infections. The 500 million new tests will be made available in January and will reach Americans through the mail, according to the White House.

Distributing free at-home tests to all Americans was written off by the White House as recently as December. Press secretary Jen Psaki scoffed at the beginning of that month when asked if tests should be free and given out, available everywhere.

“Should we just send one to every American?” she asked.

But weeks later, Psaki expressed some regret about her earlier comments.

“There’s not a day that goes by that I don’t leave this podium and wish I would have said something with greater context or a more precision or additional information,” Psaki said.

Last week, Biden — speaking to the nation’s governors — conceded the steps he took earlier this year to scale up testing capacity for Covid-19 weren’t enough to meet demand as a wave driven by the highly transmissible Omicron variant crashed across the country.

“It’s not enough. It’s clearly not enough. If we’d have known, we’d have gone harder, quicker if we could have,” he said while joining a weekly virtual meeting between state leaders and members of his Covid-19 response team.

He said long testing lines over the Christmas weekend “shows that we have more work to do.”

Last week Biden — citing the Stafford Act — directed federal funding via FEMA to assist in the deployment of Covid testing.

“It is the policy of my Administration to combat and respond to the coronavirus disease 2019 (COVID-19) pandemic with the full capacity and capability of the Federal Government to protect and support our families, schools, and businesses, and to assist State, local, Tribal, and territorial governments to do the same,” Biden wrote. “This policy includes the use of emergency and disaster assistance available from the Federal Emergency Management Agency (FEMA) to get COVID-19 testing to the places that need it most.”

The order directs the Department of Health and Human Services “on a fully reimbursable basis, to provide testing sites, launched and operated by HHS in close coordination with State, local, Tribal, and territorial public health departments,” using FEMA funding.

This is a breaking story and will be updated.