Biles and who? Olympic picture cloudy at US Championships 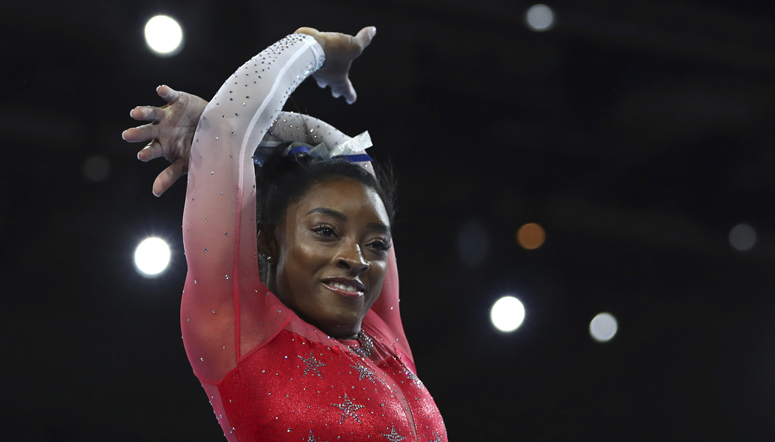 Simone Biles of the U.S. performs on the floor during women's team final at the Gymnastics World Championships in Stuttgart, Germany, Tuesday, Oct. 8, 2019. (AP Photo/Matthias Schrader)

nastics teams is murky at best. And the athletes who will try to take another step toward that goal this week in the U.S. Championships know it.

Maybe because it is.

The COVID-19 pandemic and the one-year postponement of the Tokyo Olympics forced the athletes who were pointing toward the summer of 2020 to recalibrate.

The 24-year-old Skinner figured she’d be retired by now. Instead, she found herself training at Dickies Arena on Wednesday alongside the 24-year-old Biles and 32-year-old world champion and Olympic silver medalist Chellsie Memmel.

The three “old girls” as Skinner put it are among the 31 women in the field, the most for U.S. Championships since 1995. The decision to push the Tokyo Games to 2021 allowed a wave of first-year seniors like 16-year-old Skye Blakely to crash the party. It also opened the door for Memmel to mount an unlikely comeback.

Throw in the dearth of international assignments — usually a good barometer of who the serious Olympic contenders are — over the last 16 months and it gives nationals a much more uncertain vibe than usual.

Skinner vividly remembers knowing who she was competing against during the run-up to the 2016 Rio Olympics. The picture was crowded. Stacked, too, with 2012 Olympic champion Gabby Douglas and three-time Olympic gold medalist Aly Raisman among those vying for one of the spots.

“Every workout, it was like, ‘I want to be there. I want to be at the top. I want to get in the top four. I want to make that Olympic team,’” Skinner said. “And now it’s kind of like, you know, I feel like everyone’s struggling through something.”

She’s not kidding. A number of women who were fixtures during the Olympic quad are still trying to regain their form thanks to injuries. Skinner fought through a bout with COVID-19 and pneumonia over the winter. Sunisa Lee, a three-time world championship medalist in 2019 and one of the best uneven bars workers on the planet, is attempting to grit her teeth through an ankle issue that’s slowed her training. Morgan Hurd, the 2017 world champion, has undergone a series of surgeries on her right elbow.

“It is going to be kind of crazy to see how it all plays out,” Skinner said.

The U.S. Classic last month marked the first major meet for most of the high-profile Americans since before the pandemic shutdown in March 2020. Even Biles was not immune to rust. While she drilled the first Yurchenko double-pike vault done in competition by a woman, she also shorted her dismount on floor exercise and came off the bars.

For Biles, however, everything through the U.S. Olympic Trials later this month is a warm-up for what awaits in Tokyo. She can afford a slip here or there. The others trying to join her, not so much.

“It is kind of nerve-wracking, too, because you don’t know where everybody is at,” Lee said. “A bunch of people are injured as well. So it’s kind of hard to tell who the team will be right now. And I think just having a bunch of new seniors come up and just like it is a wider selection and it’s hard to tell because everybody is so good.”

Or, in theory, they will be by the time the Americans — four team members, a specialist and a spot Jade Carey earned through her success in World Cup events — land in Japan in July.

The issue is much the same on the men’s side, where Mikulak figures to be a lock to reach his third Olympics barring an injury. The 28-year-old who is still searching for his first Olympic medal, insists he’s not taking anything for granted.

“It’s kind of like I’m getting my life senioritis vibes where everything is just like nostalgic and I’m just trying to appreciate it as much as I can, because I think for so long I haven’t appreciated it the way it should have been,” Mikulak said. “Because I’m like, ‘Oh, I’ll be back next year.’ I’m always just looking for the next year as well. Now it’s like, ‘Oh, there’s not going to be a next year.’”

Yul Moldauer, the 2017 national champion and a three-time world championship team member, believes the Olympic delay leveled the playing field in a way. With no recent history to bank on, everyone is starting over in a way.

A scheduling conflict with the Pan American Gymnastics Championships — being held this week in Brazil — forced USA Gymnastics to modify its selection process. Only the results of Olympic Trials will be taken into consideration when putting the team together unlike 2016, when the combined results of nationals and Trials served as the baseline.

That means this weekend will give the men a chance to make a statement. Or make mistakes. Or maybe both.

“I anticipate a lot of nerves, even still a little bit of rust from guys that may have not competed at all in over a year,” U.S. high-performance director Brett McClure said. “And we’re going to roll the dice and see what happens. It’s exciting. It’s terrifying.”