BOSTON (WHDH) – President Trump has spent a lot of time in the Granite State in the hopes of reversing his razor-thin loss to Hillary Clinton in 2016 — but it looks like he still has some work to do. 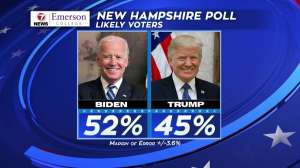 “If I was Joe Biden, I’d feel good about being up seven, considering how poorly he did in the Democratic primary in New Hampshire,” said Spencer Kimball, director of Emerson College polling. “So, there was a lot of skepticism that he would struggle in New Hampshire and we saw some early polling suggesting that. A seven-point lead is a strong lead.”

The first Presidential Debate was a big opportunity for both candidates to change the shape of the race.

But the chaotic face-off appears to have not changed the minds of voters, with 45 percent of those polled saying Biden had the strongest performance compared to 38 percent who say Trump was stronger — nearly the same margin as the voter preference on their candidates. 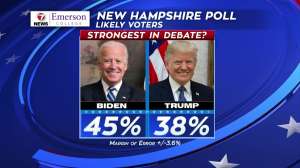 Our poll also indicates that two other big stories didn’t appear to move the needle.

The president’s push for a quick confirmation of a new Supreme Court justice and a New York Times report on the president’s tax return both seem to track with the voters’ views of Trump and Biden.

The one story that our poll shows may be trouble for the president is the coronavirus pandemic, which Trump says is almost over.

But New Hampshire voters disagree, with 77 percent calling coronavirus a major or moderate public health threat and just 23 percent saying it’s minor or not a threat at all. 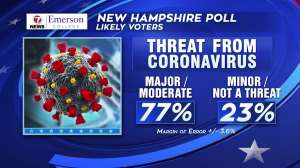 “I see the coronavirus as a big wild card in this election because not only will it impact those voters attitudes about the severity of the crisis but also how people are going to come out and vote,” said Kimball.

About one in four New Hampshire voters told us they plan to vote by mail. 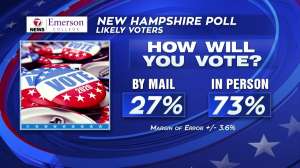 That’s more than twice as many as in 2016 but still lower than many states that also offer early voting.

With so much different this year, New Hampshire voters aren’t expecting a quick answer on who our next president will be. 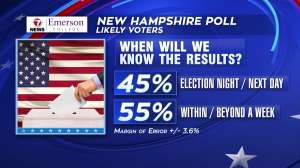 “Well Dan, I think that’s a positive, because it creates a proper expectation for voters. And for the media not to have to push out a number and get to the right number to make sure that we have legitimacy in the process.”

While Trump trails in our poll, Kimball points out he also trailed Clinton at this time in the race last time around.

He says we can’t tell whether Biden will see his lead “melt” the same way…. But the excitement of Trump’s voters could be the X-factor.

“What we see in this poll is that a lot of people plan to vote on Election Day and those Election Day voters tend to be breaking for Trump by 7-8 points. So, if he’s able to expand the playing field in New Hampshire to bring in new voters, more voters, that could create that ‘melt’ or that change in the race in the next four weeks.”

Kimball says the late changes in the race four years ago proved that campaigns do matter. And while these polls show the state of the race now. What the candidates do in the next five weeks will determine what the results look like after election day.