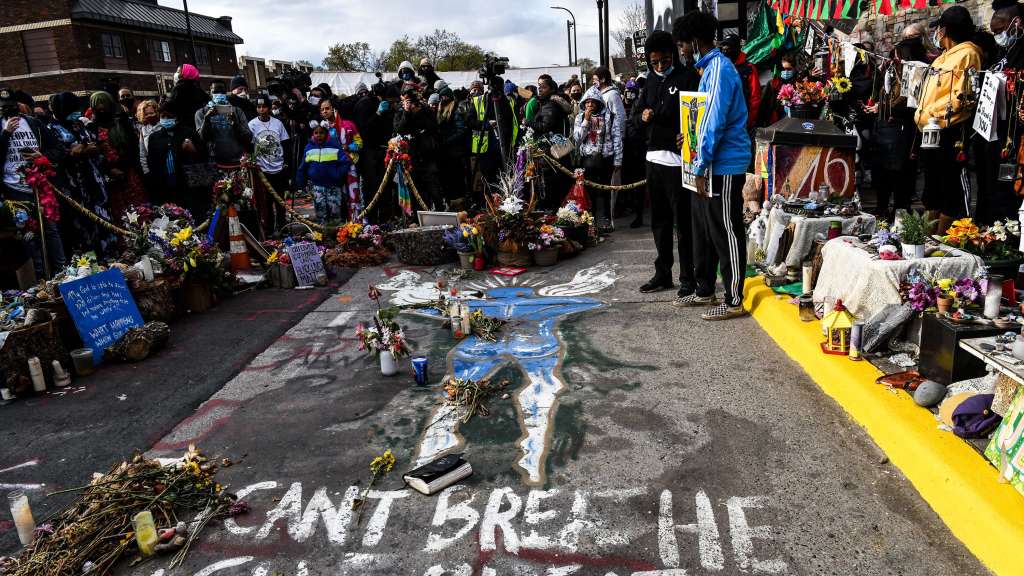 People gather at George Floyd Square after the verdict was announced in the trial of former police officer Derek Chauvin in Minneapolis, Minnesota, on April 20. Portions of the memorial were being removed by city workers June 3, Minneapolis City spokesman Sarah McKenzie said. Credit: CHANDAN KHANNA/AFP via Getty Images

The square at the intersection of Chicago Avenue and 38th Street, where Floyd took his last breaths as a police officer knelt on his neck, has been closed off for over a year and become a makeshift shrine.

“Barricades have been removed so that ultimately (the intersection) will be reconnected into the neighborhood and traffic will be able to resume,” McKenzie told CNN.

“This intersection will never go back to ‘normal.’ This city is really doing everything it can with the community to preserve as many art pieces as possible.”

McKenzie emphasized that this is a community led effort being done in coordination with the group Agape Movement and some artifacts like the iconic fist sculpture will remain at the intersection.

In pictures provided by CNN affiliate WCCO, multiple workers can be seen Thursday morning moving cement barricades with tractors and City of Minneapolis trucks. In another video obtained by CNN’s Sara Sidner, at least a dozen workers in hardhats and yellow vests can be seen removing items from the middle of the intersection.

The Minneapolis Police Department told CNN they currently did not have a presence at the location and do not have a statement.

In September, the Minneapolis City Council unanimously voted to approve the renaming of the 38th Street and Chicago Avenue intersection after Floyd.

However, the intersection has been the site of recent violence after one person was shot dead there in March and another was transported to the hospital with non-life-threatening injuries after being shot a block away last week on the one-year anniversary of Floyd’s death.

More details are expected to be released later Thursday morning from the city and Agape Movement.