Plane veers off runway in China and catches fire; 36 injured 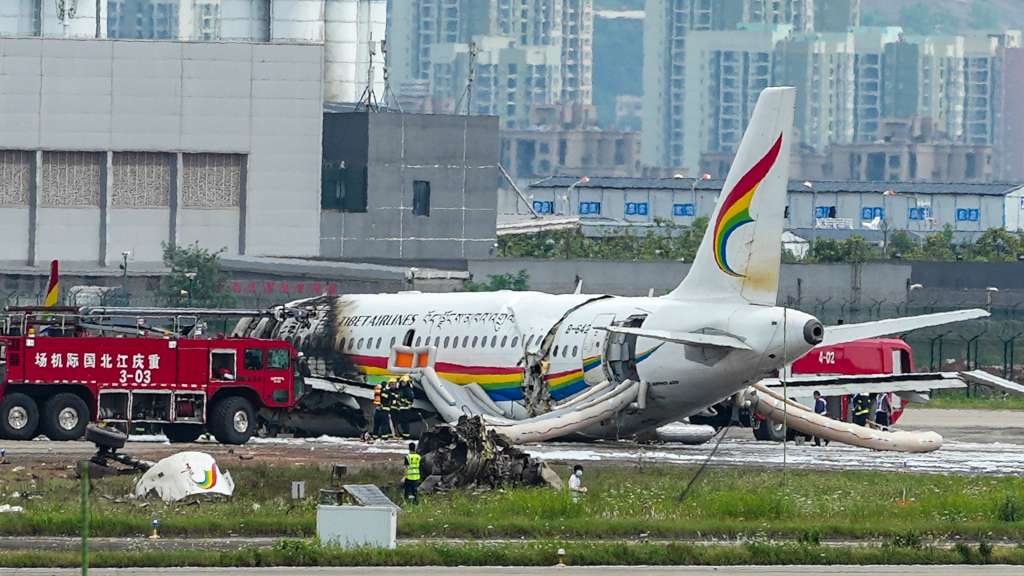 In this photo released by Xinhua News Agency, a passenger jet that veered off a runway during take-off and caught fire is seen in the aftermath in Chongqing Jiangbei International Airport in southwestern China's Chongqing Thursday, May 12, 2022. The Chinese passenger jet left the runway upon takeoff and caught fire in western China on Thursday morning, and several people were injured. (Liu Chan/Xinhua via AP)

BEIJING (AP) — A Chinese passenger jet veered off the runway during takeoff and caught fire on Thursday, sending black smoke billowing into the air and injuring more than 30 people.

The Tibet Airlines flight with 122 people on board was departing from the southwestern city of Chongqing for a flight to Nyingchi in China’s Tibet region.

Videos shared by state media showed the left side of the aircraft on fire as people who appeared to be passengers headed away from the scene. Other footage showed fire trucks spraying water on the plane. The accident happened at 8:09 a.m. (0009 GMT), Tibet Airlines said.

The Airbus A319-115 jet had 113 passengers and nine flight crew on board, all of whom were evacuated. During the evacuation, 36 people were injured with sprains or scrapes, according to the southwest regional branch of the Civil Aviation Administration of China (CAAC).

“In the process of taking off, the flight crew discovered an abnormality with the aircraft and stopped the takeoff according to the procedures. The aircraft left the runway and caught fire after the engine hit the ground. Currently the fire has been put out,” the aviation authorities said in a statement.

One passenger, Long Anquan, told China News Service that during takeoff he heard an unusual noise, after which the plane started to lean to one side and hit the ground with its wing. Long quickly bent forward and put his hands over his head, but the impact was so strong that he was still injured.

Long said he felt lucky to survive. “I’ve used up all my luck in my entire life,” he said in an interview with China News Service.

The airport said about two hours after the accident that flights had resumed and that an investigation was underway. One of the three runways remained closed, the CAAC said.

The incident follows the crash of a China Eastern Boeing 737-800 in southeastern China on March 21 in which all 132 people on board were killed. That accident, in which the plane went into a sudden nosedive and slammed into the ground in a mountainous area, remains under investigation.