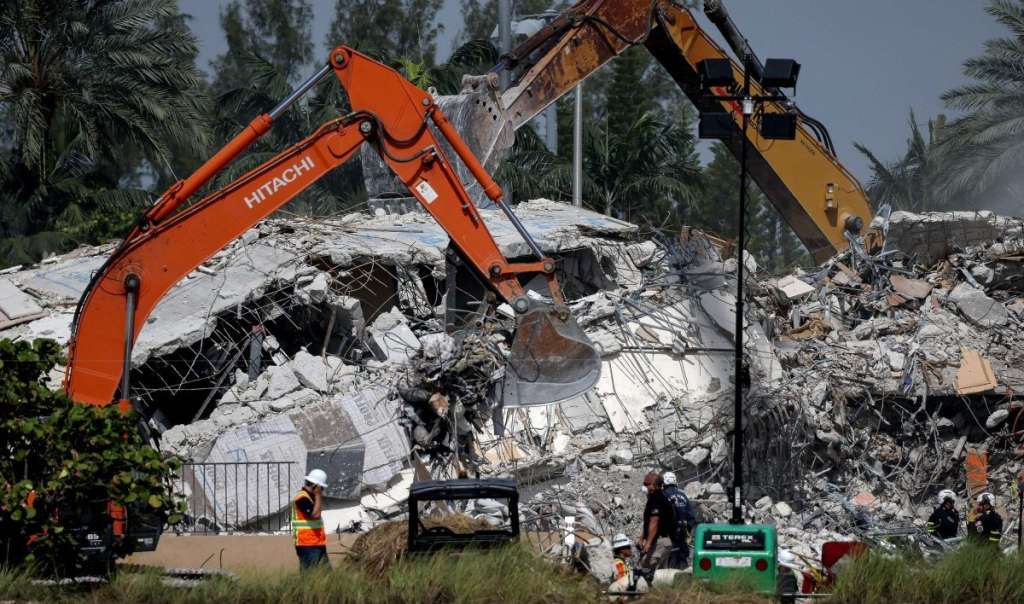 (CNN) — In the wake of last month’s deadly building collapse, inspectors from around South Florida have fanned out to review other high-rises for damage in an attempt to avert another tragedy.

But Champlain Towers South had been visited regularly by officials in the years before it fell. Inspectors from the town of Surfside conducted permit-related inspections at the condo tower more than once a week on average in 2018 and 2019, according to a CNN analysis of town records.

Even as an engineer hired by the building’s condo board warned of “major structural damage” in the property, and as residents squabbled over funding for expensive repairs, there’s no record that any of the town employees who streamed through the building raised red flags over a condo that would collapse with deadly consequences two years later.

One reason why: Their job was to ensure compliance with permits ranging from plumbing upgrades to air conditioning repairs to window installations in individual units, not to review the structure of the building.

Now, state and local officials and real estate experts around Florida are questioning whether periodic, structural inspections of buildings should become mandatory statewide, and what role government inspectors should play.

Some experts say the large number of inspections at Champlain Towers South, at a time when broader flaws in the building seemed to fly under the radar in the town government, raises questions about the priorities and incentives in Florida’s building regulations. Towns and cities collect fees from permits and permit-related inspections — while larger reviews of structural safety are the responsibility of property owners.

“Inspectors love to go to buildings down here when the little guy, meaning the unit owner, God forbid, installs kitchen cabinets without a permit,” said Eric Glazer, a South Florida attorney who is part of a committee that will be advising a task force reviewing Florida condominium law. “But on the way, when they’re walking to that place, if they happen to pass the common elements, and the common elements are literally falling down around them, they’ll ignore it and continue on just to get the little guy. That’s how it works.”

Since the disaster — which as of Tuesday has taken 94 lives and left 22 more still unaccounted for — South Florida officials have scrambled to re-inspect other aging buildings, prompting evacuations of at least three other residential structures deemed unsafe.

And as Floridians up and down the state’s 1,350 miles of coastline fret about whether their condos could be in danger, calls are growing for reform.

In some ways, Miami-Dade County, which includes Surfside, has some of the strictest building inspection rules in Florida. Along with neighboring Broward County, Miami-Dade requires building owners to hire an engineer to inspect their structures every 10 years after they turn 40 — a requirement first passed after a collapse of a Miami office building in 1974 that killed seven people.

Champlain Towers South was set to hit that 40-year mark this year. An engineer hired by the condo board had found alarming damage, which he documented in a 2018 report, and work had begun on some repairs at the time it fell.

But before buildings turn 40, the only inspections required by government officials are to ensure property owners are complying with individual permits.

Surfside conducts hundreds of those inspections every year, according to a 5,700-page document posted on the town website listing building inspections going back to the 1990s. CNN converted the document into a more easily usable database, and searched for all inspections at the address of Champlain Towers South, 8777 Collins Ave.

The analysis found that the town conducted more than a dozen inspections at the building every year since 2013, with more than 100 in 2018. The most common inspections were of permits for “alterations and repairs,” exterior windows and doors, and air conditioning replacement.

On some days, multiple inspectors visited the building on the same day. Inspections that were listed with a status of “cancelled” were excluded from the analysis.

In addition, CNN obtained through a public records request a separate document from the town listing inspections since October 1, 2019, after the department changed its record-keeping system. That showed that inspectors conducted more than a dozen inspections at Champlain Towers South in both 2020 and 2021, although not as frequently as the two years prior — likely in part due to the coronavirus pandemic.

The most recent was an inspection by the town’s head building official, Jim McGuinness, who reviewed work happening on the building’s roof on June 23, the day before the collapse. McGuinness has said he saw no signs on the roof that the building was in danger of toppling.

In an interview, McGuinness pushed back against the notion that the town’s inspectors have focused more on permitting issues than structural integrity and said buildings must be certified for compliance with all building codes before they are occupied.

“Our job is life safety in buildings. Period. That’s our job,” McGuinness told CNN, though he added that building owners have responsibility to maintain their properties. “We’re the guys who help people help themselves.”

McGuinness said in light of the collapse, the town’s inspectors are now examining buildings for “any signs of trouble.” He added that buildings over 30 years old should begin assessments of their own ahead of their 40-year deadlines.

“The fact is that we depend on the engineers to provide us a report” about whether a building is safe, he said, referring to engineers hired by building owners.

And Guillermo Olmedillo, a former town manager for Surfside, noted that the inspectors sent to buildings to inspect permits are experts in specific trades, like air conditioning repair or electrical wiring, not necessarily structural engineering.

“It’s like doctors: If I go to a cardiologist, can he tell me there is something wrong with my endocrinology?” Olmedillo asked.

Still, he noted that if inspectors saw concerning issues they could flag it to other city officials or employees.

Several contractors who did work at units in Champlain Towers South told CNN that the inspectors from the town were diligent and professional.

Jeff Rose, a general contractor whose parents owned a unit in the building (and weren’t there when it collapsed), said he didn’t blame town inspectors who were sent to the building to review permits for not sounding the alarm on the building’s safety.

“If you’re going to check out somebody’s flooring, you get out of your car, check in with security, get into the elevator, and check out the floor of that unit, and that’s it,” said Rose, who has worked in about a dozen units in Champlain Towers South over the years. “Never would you start randomly walking around a whole building to inspect it.”

After the collapse, he said, he anticipated the rules would change to require more regular inspections of broader structural issues and “give people the peace of mind they need.”

At least one official in the town government had seen the 2018 report from the engineer warning of “major structural damage.” Rosendo Prieto, the town’s former head building official, was sent a copy of the report by a condo board member, but told residents that their building was “in very good shape” just a few days later, according to minutes of a board meeting obtained by CNN.

Grande, the retired official, said Prieto — who has not responded to CNN’s requests for comment — should have prioritized the issue and made sure the association moved swiftly to address the damage.

“He looked at the report that basically said the building was unsafe and needed priority and he went ahead and told the condo association, ‘Your building is in good shape. Don’t worry about it,'” Grande said.

Democratic State Sen. Jason Pizzo, who represents Surfside, has said he’s planning to push for new legislation addressing condo inspections during the legislature’s next session, and hopes the disaster will spark action.

“When we all go up to Tallahassee, I don’t want everybody to forget and have short-term memories about where we were in that moment,” Pizzo told local TV channel WPTV.

The Florida State Bar has formed a task force of legal experts to review the state’s condo laws and make suggestions to the legislature. And a group of engineering organizations has formed a separate working group to make their own recommendations.

The engineers’ task force is studying “what should these inspections entail and who can do them,” said Allen Douglas, the executive director of the Florida Engineering Society and the American Council of Engineering Companies of Florida and a member of that working group. That could involve a statewide rule, or possibly varying regulations around the state. For example, he said, municipalities that are “right along the coast, that get the sea spray and at times salt water intrusion” might face stricter regulations about how often to conduct inspections.

In 2008, the state passed a law requiring condo associations to conduct studies by engineers looking at their building’s needed maintenance and finances at least every five years. But that rule was repealed in 2010 amid criticism from some real estate lawyers and property managers that the reviews were overly expensive, and regular studies are no longer required.

While Florida law still requires condo boards to maintain their common areas, “nobody is checking to see if you do or you don’t,” said Glazer, the condo attorney who’s assisting the state bar task force. “You are on the honor system.” He said the state should require condo owners to save money for repairs, and require local building officials to conduct more regular structural inspections.

So far, Gov. Ron DeSantis has stayed noncommittal on potential changes to building rules in the wake of the collapse, saying last week at a press conference that he believed the Champlain Towers building “had problems from the start.”

“If there is something identified that would have implications broader than Champlain Towers, then obviously we are going to take that and act as appropriate,” DeSantis said.

Some city and county officials are also looking at potential changes. Scott Singer, the mayor of Boca Raton, Florida, told CNN that his staffers are drafting an ordinance that would require the recertification of buildings after 30 years or possibly less.

He said he had talked to engineers whose phones were “ringing off the hook” with people trying to schedule inspections.

“People should have confidence that the Surfside tragedy was an incredibly rare event, and we want to take more proactive measures to increase our safeguards to ensure it’s not repeated,” he said. “Everyone’s looking to prevent this freak occurrence from ever happening again.”