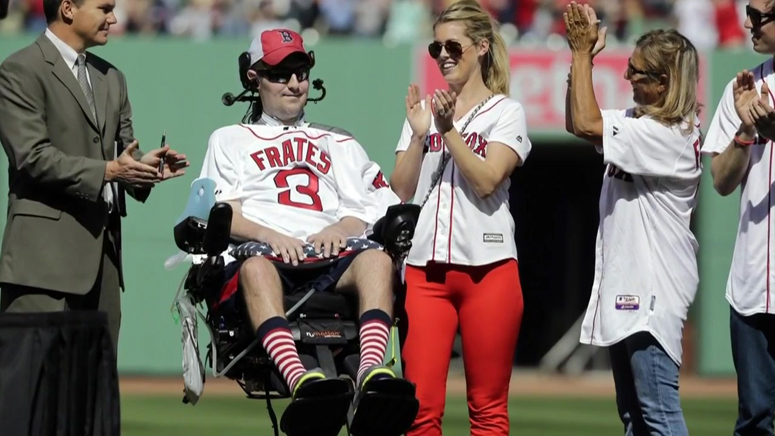 On June 2, less than two years later, the man known as the “Iron Horse,” died from ALS but, not before bringing notoriety to the debilitating disease.

It was not until decades later, in 2014, that Beverly native Pete Frates raised awareness once again with his viral Ice Bucket Challenge that raised millions of dollars for ALS research.

“It is so surreal the way it’s come about because Pete had such big ideas, right? He had lofty goals. But I don’t think he ever dreamed this big,” said Pete’s father John Frates.

Exactly 80 years after Gehrig’s death, Major League Baseball has invited the Frates family to take part in its inaugural Lou Gehrig Day. To stand where he stood in front of the Yankee Stadium crowd in memory of their son and in honor of the legacy he left behind.

“Maybe a whole new generation of people will remember what this is going forward. ALS and how destructive it is and there has to be a cure. There has to be a treatment,” Frates said.

Just as the mural at sits inside Frates Hall in Endicott College, Gehrig, Frates and Major League Baseball are all swinging for a cure.

“It really epitomizes taking this disease out of the shadows,” said Frates. “Yes you lose your dignity, yes you don’t want to promote it, and Pete said, ‘No. We’re going to do social awareness. I want people to witness and see what I am going through so that the world will know how hideous and destructive this thing is.”

The Frates family is continuing to raise money for the Leonard Florence Center in Chelsea.