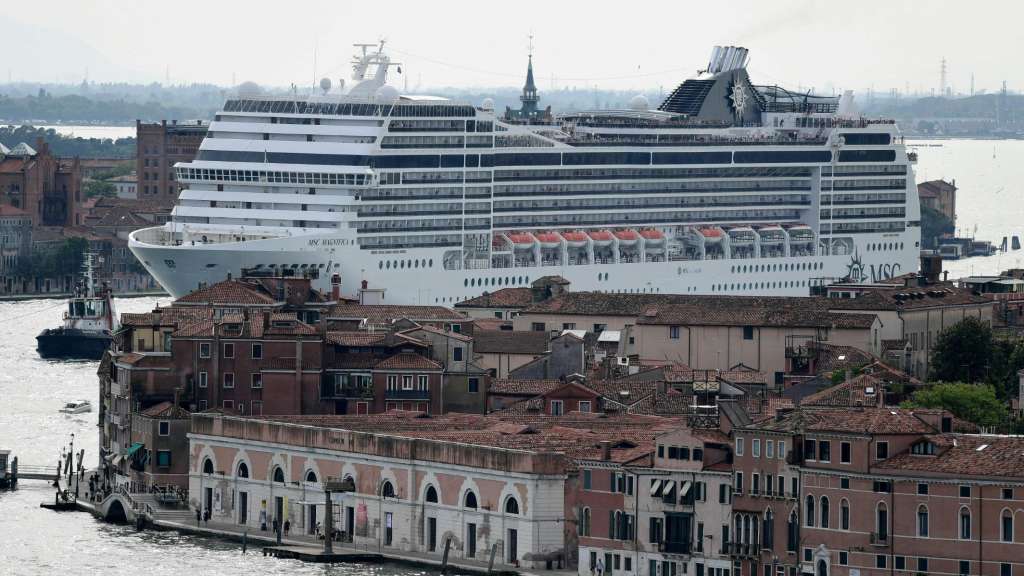 Cruise ships sailing through the city center have been a controversial sight. First there was a ban, then it became a pre-ban for an uncertain date in the future. Then they were back in the city until further notice. Mandatory Credit: Miguel Medina/AFP via Getty Images

(CNN) — First there was a ban. Then it became a pre-ban for an uncertain date in the future. Then they were back in the city until further notice.

Now, cruise ships will be banned from sailing through the city center of Venice from August 1, the Italian government has announced.

Instead of sailing past the iconic St Mark’s Square, and up the narrow Giudecca Canal, docking in the city-center port, from next month large cruise ships will be rerouted through the Venice lagoon, and dock on the mainland, at the industrial port of Marghera.

The Italian government announced the ban late on July 13, calling it “an important step for the safeguarding of the Venetian lagoon” in a statement.

In June, UNESCO drafted a recommendation to add Venice to its list of World Heritage in Danger, including the presence of cruise ships in its reasoning.

Culture Minister Dario Franceschini, who has regularly voiced his opposition to cruise ships, tweeted that he was “proud of having kept a promise.”

He was a proposer of the new law, along with President Mario Draghi, and Italy’s minister of sustainable infrastructure and transport, Enrico Giovannini.

The law will protect the “environmental, artistic and cultural heritage of Venice,” said the government in a statement.

It will affect ships weighing over 25,000 tons, with lengths of over 180 meters.

The government said that a maximum of five berths will be created at Marghera, at a cost of €157 million ($185 million).

It has promised compensation for those who lose out financially from the law, although it did not specify whether this includes any of the 4,200 local workers employed by the cruise industry.

Francesco Galietti, director of trade body Cruise Lines International Association Italy (CLIA), told CNN that the reaction from the cruise industry was “overwhelmingly positive,” since they have been pushing for an alternative for years.

“We’ve been asking for 10 years to have somewhere else to go, and finally we are on track to get it, so we’re very upbeat — it’s the first time in 10 years that we’re seeing tangible progress,” he said.

However, although the deputy mayor of Venice, Andrea Tomaello, had previously told CNN that ships would be rerouted to Marghera this summer, Galietti said the berths would not be ready: “There’s going to be nothing this year, all this scramble is to get Marghera ready for next year.”

Tomaello did not respond to a request for comment. But Galietti said that cruise lines are now “eyeing the 2022 season.”

“I think this is it for this season, full stop,” he told CNN.

“Each company will have to review its plans — some will cancel altogether, others will maybe divert what was assigned to Venice to Trieste, Monfalcone or Ravenna.”

Opponents of cruise ships in Venice hailed the news, albeit with some caveats.

“We are happy,” wrote the representatives of the Comitato No Grandi Navi, who campaign against cruise ships in the city.

Although they added: “Great if the compensation will go to the workers, who are unprotected and precarious to guarantee the maximum profit for tourism multinationals, bad if it those who profit from a public allocation of funds are those who have speculated on Venice in recent years.”

Galietti said: “We will have to see how the compensation will be structured — it’s important not just for cruise lines but for local business community, which has been literally starving for 18 months… but the entire ecosystem will in one way or another be eligible for some sort of refund.”

The final decree has not yet been released.

Looking for a long-term solution

The Marghera docks will be a “short to medium-term solution” according to Galietti — that’s because although Marghera is on the mainland, it is still in the Venetian lagoon.

Multiple scientific papers have shown that erosion from traffic (including commercial vessels) is damaging the lagoon’s ecosystem.

The government ruled on April 1 that a permanent port must be constructed outside the lagoon — but that will take time.

“The project must be truly innovative and sustainable in order to target port activity in the 21st century,” said Fulvio Lino Di Blasio, president of the North Adriatic Sea Port Authority.

A spokesperson told CNN that the timeline will be divided into two phases. Ideas are sought for tender until December 31, 2021. The top three proposals will then be investigated over the next year, and a winner will be selected by June 30, 2023.