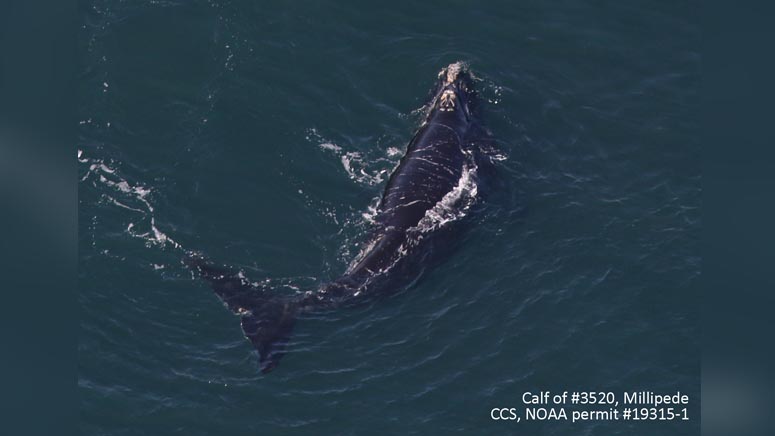 A group opposing wind projects off the coast of Massachusetts released a report Tuesday that documents contributions from wind energy developers to environmental groups in the state, donations that the authors of the report say cast questions on the ability of groups to analyze the impacts that wind projects have on the endangered North Atlantic Right Whale.

The report, released by the Save Right Whales Coalition, catalogs $4.2 million between wind developers like Vineyard Wind, Bay State Wind, and Orsted to environmental groups in Massachusetts such as the Environmental League of Massachusetts, New England Aquarium, and the Woods Hole Oceanographic Institute.

The flow of money, coalition member Lisa Linowes said, raised a “red flag” for potential conflicts of interest when it comes to investigating the environmental impacts of offshore wind development in places where the North Atlantic Right Whale resides. The whale is one of the most endangered large whale species in the world, according to NOAA Fisheries.

“The public has come to trust the word of these organizations, that when they say wind turbines can be safely sited within and near the waters where the right whale lives, breeds, feeds, that they will be safe,” Linowes said. “Based on their public statements and based on the donations … we should question the priorities of these organizations.”

The Save Right Whales Coalition study says the New England Aquarium received a “donation pledge” of $250,000 in 2018 from Bay State Wind, a joint venture between Orsted and Eversource during the 2019 procurement process for offshore wind energy, an undisclosed amount from Vineyard Wind in 2019, and an undisclosed amount in 2020 from Equinor, a petroleum company with offshore wind ventures.

New England Aquarium spokesperson Pam Bechtold Snyder said the aquarium has not received any donations from offshore wind developers but instead has contracts and agreements for conducting scientific research.

In a statement, Snyder said the aquarium is helping support the “responsible development” of offshore wind through independent research on vulnerable ocean species that reside in future wind turbine areas.

“Wind energy is an important tool for providing carbon-free, clean energy and ultimately minimizing climate change impacts, particularly for protected species such as the North Atlantic right whale,” the statement said. “The aquarium is committed to protecting the blue planet and will continue to provide the expertise and best available science to ensure that the growth of ocean industries and the blue economy is balanced with the best possible management and protection of the ocean and its wildlife.”

“The public needs to know, we want to know, whether or not these organizations are working largely for the wind companies or at least with an agenda on climate change and perhaps sacrificing the Right Whale,” Linowes said.

The report says the Environmental League of Massachusetts received a donation ranging from $5,000 to $9,000 and event sponsorship in 2020 from Vineyard Wind. FirstLight Power Resources, a renewable energy supplier, also donated over $10,000 to the organization in 2020, according to the study.

Environmental League of Massachusetts spokesperson Ellen Macaulay said the organization advocates for a clean energy future “where wildlife and environmental protection is an essential component of offshore wind development.” As a 501(c)(3) nonprofit, Macaulay said ELM’s policy decisions are made independently of funding sources.

“Climate change is the single greatest threat to our oceans and our wildlife. The waters off the coast of New England are among the fastest-warming worldwide, causing profound impacts to wildlife and their habitats,” Macaulay said in a statement. “Decarbonizing our grid is critical to New England’s efforts to address climate change. Responsibly developed offshore wind will be the backbone of that strategy and will be essential to averting the worst impacts of climate change, which is an existential threat to wildlife and our communities.”

The report says the Falmouth-based Woods Hole Oceanographic Institute, a private nonprofit research group studying marine science and engineering, received during or after 2018 a $500,000 donation from Orsted, the Danish company that owns and operates the Block Island Wind Farm off the coast of Rhode Island.

“Industry has no control over the research, the conclusions reached during the course of the research, nor the dissemination or communication of research results,” Pelisson said. “WHOI’s research does not constitute endorsement of any company or industry.”

Concerns about the impacts offshore wind developments have on Right Whale populations and their habitats have permeated renewable wind discussions for years in New England.

Vineyard Wind previously agreed to a number of measures to protect the whales while it builds out the wind farm off the coast of Nantucket and Martha’s Vineyard.

Among those was a commitment to invest $3 million “to develop and deploy technologies that ensure heightened protections for North Atlantic right whales and other marine mammals as the U.S. offshore wind industry continues to grow,” according to an agreement between Vineyard Wind and several environmental organizations.

Mary Chalke, a member of Save Right Whales, said the ocean between Nantucket, Martha’s Vineyard and Block Island “is such an amazing, pristine, and special resource because it supports a rich biodiversity that many other areas have lost.”

Chalke said the first offshore wind projects in the area will serve as a “testbed,” or an experiment that will provide data on the impacts they have on whales that will be used to further regulate the industry.

“If these environmental groups and others accept money from the wind companies and it is designated for impact studies, or if they are partnering with the wind companies for these studies when the outcomes will be used to develop regulation of offshore wind industry going forward, it calls into question the impartiality and legitimacy of the studies,” Chalke said.

According to the Save Right Whales report, the Massachusetts Division of Marine Fisheries received a $201,207 grant from Shell through the National Fish and Wildlife Foundation.

The division, according to an Executive Office of Energy and Environmental Affairs spokesperson, received the grant to develop a framework for ropeless fishing in New England.

“The program seeks to advance National Oceanic and Atmospheric Administration’s sustainable fisheries goals to partner with fishermen, stakeholders, state agencies, and Fishery Information Networks to systematically integrate technology into fisheries data collection and observations, and streamline data management and use for fisheries management,” the agency said.